RADIO: THE #1 MASS REACH MEDIUM – MANNING MEDIA: THE #1 LOCAL BROADCASTING COMPANY
The results are in from Nielsen’s Total Audience Report for the first quarter of 2015. Radio is #1! Nielsen reported that radio is the number one reach medium, surpassing television and even smartphone usage by adults 18 years of age and older. 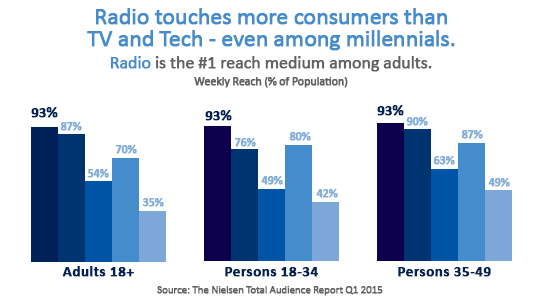 Manning Media, locally owned and operated parent company of four of the region’s top ranking radio stations, 106.9 The Eagle, Key 103.1, WARK 98.9 FM, and 102.1 MOREFM is the number one local mass reach broadcasting company in Mid-Maryland and West Virginia, according to the most recent local Nielsen Ratings.
According to statistics gathered over in spring 2015, Manning Media’s cumulative audience, the number of unique listeners that tune in to the stations on a weekly basis, comes in at approximately 130,000[1].  Additionally, over 56% of Manning’s listening audience has an average annual household income of $75,000 or more and collectively they spend $1.8 billion dollars in the retail markets where Manning’s listeners, live, work, shop and play.
Radio also has the power to combine all the unique characteristics of traditional media with those of new and emerging media in a way that television and internet cannot. When local radio is used to activate digital advertising and interactive campaigns, the results are even more powerful. Manning Media has incorporated digital and interactive media to their offerings to assure their advertising partners the most accurate and effective results.
With 93% of all adults listening to radio on a weekly basis, radio is still the number one reach medium and Manning Media is your number one local broadcasting company. There is still no better way to reach your ideal customer!

[1] Total cumulative audience of 129,100 in Frederick Co and Washington Co, MD and Berkeley, Jefferson and Morgan Counties in West Virginia according to Nielsen Audience Estimates, spring 2015.