There are whispers in the marketing world that Facebook is not the medium to use if millennials are your target. The rumors go something like this, “If Gen X or Boomers are your audience, Facebook is your Avalon – The parents have wrangled the medium away from their children.”

Recent statistics seemed to show a shift, indicating 18 to 34s may have been transitioning away from Facebook to platforms like Twitter and Instagram. On the contrary however, it appears that rather than giving up any one particular platform, users are adopting multiple social media platforms. 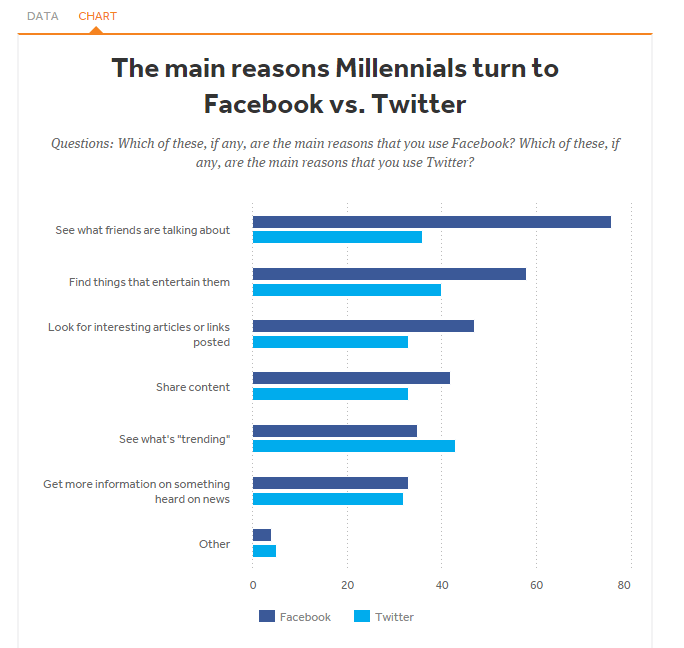 In a 2015 article from American Press Institute the findings from a study on social media usage published data indicating that Millennials are just as prevalent on Facebook as they ever were.
As many as 88% of Millennials use Facebook as their primary source of news and information, as well as a wide range of other digital activities. Instagram delivers news and information to 53% of this demographic while Twitter’s share comes in at 33%.
Facebook doesn’t just lead the way with millennials. The one billion plus daily active users who span all age groups, ethnicities, genders, social, educational and economic statuses across every geography are proof of Facebook’s domination in all categories.
In a recent article on Bloomberg Business, Mark Zuckerberg, CEO of Facebook, is quoted as saying the average time spent on Facebook is a whopping 40 minutes. Additionally, 45% of Facebook users visit the site several times per day. This is unheard of in regard to “time spent” internet stats web wide.
With chart topping statistics like those noted above it would seem like a bullet proof plan to include Facebook in your marketing but consider that with 1.01 billion daily users, the population of Facebook is larger than the populations of the United States, Indonesia, Brazil and Pakistan combined. Facebook is a vastly expansive empire!
As a Marketer, navigating Facebook’s population isn’t the only behemoth to consider. The most common complaint by users of Facebook is related to the sheer amount of information there is to sift through – literally quadrillions of bytes of data.
In a post on Facebook’s blog they describe their data usage as “300 petabytes of data in 800,000 tables – generating 4 new petabyes of data, 600,000 queries and 1 million map-reduce jobs per day.”
So, how do you leverage your marketing message when considering the magnitude of this platform and the saturation level of the playing field? The answer is thoughtful planning!
Here are just a few simple questions to ask yourself before you post:

If you want to take your Facebook efforts beyond the standard “posts” or “boosts”, Manning Media has the ability to launch in-feed advertising that meets all the Facebook advertising requirements as well as utilizing our knowledge of social media best practices. To contact us in Frederick, Call 301-620-7700 or in Hagerstown, Call 301-733-4500. You can also fill out our online request form by clicking HERE!.