Instagram launched in October, 2010, as an easy way to upload and share photos with people who share similar interests. The app quickly became a staple for smart phone owners around the world, garnering over one million subscribers in just two months and this early success did not go unnoticed.
Two years later, Instagram joined Facebook as the sites premier photo sharing app. Since then, Instagram has exploded into one of the largest social media platforms available with a massive user base of 400 million. But that is not their only impressive stat. Check out these numbers:

If there is one thing to take away from these numbers, it’s that Instagram has a very large, and very active user base. The unique traits of Instagram users have digital marketers increasing their budget for ad space within the platform. According to a study done by eMarketer, 48.8% of U.S. companies will utilize Instagram for marketing purposes in 2016. By 2017, that number will jump to over 70%.
While Facebook and Twitter have more users and have been around longer, when it comes to engagement with users 35 and under, Instagram wins hands down. Take a look at a few more data points from a study measuring interaction among social media platforms based on identical post made by the rock band Paramore:

According to this data, Instagram engagement was 5 times higher than Facebook and a whopping 72 times higher than Twitter. Keep in mind that Paramore’s Instagram has one-tenth the following of their Facebook page, demonstrating that Instagram tends to play better with younger audiences.
At Manning Media, we are always on the look out for new and unique ways to market our clients, and Instagram is a prime place to focus our attention. Over that past few months, we have been running test campaigns on Instagram with outstanding results. Below are some of the reasons we think Instagram works: 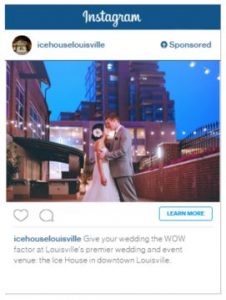 Simple Interface:
Instagram’s simple interface has been refined to allow users to focus on content one image at a time. Unlike other platforms, Instagram does not allow for non-native advertising, or ads that reside outside of the main content area.
Sponsored Posts:
Advertising on Instagram is much different from regular display advertising. The platform requires that each ad look like a traditional post with one image accompanied by a short caption. A “Sponsored” mark alerts users that the content is being paid for but we found this rarely detracts users from engaging with it.
Content Creation:
Due to the atmosphere and style of Instagram, it is almost “wrong” to include text within an image. Users tend to engage more with content that is strictly an image with a caption below it. This allows for good content to shine through. Because this is a content driven platform, adding new creative, as well as swapping out existing creative is very easy.
With Instagram, you have the ability to connect directly with your end-user.  Connect with Manning Media today to reach your unique audience with the right message, at the right time, and in the right place . In Frederick, Call 301-620-7700 or in Hagerstown, Call 301-733-4500. You can also fill out our online request form by clicking HERE!