From the website, Statista.com: Statistics and facts on the U.S. Radio Industry

“Radio is the second most powerful medium in the United States, reaching 59 percent of the country’s population daily. In comparison, 49 percent are reached by the Internet, while print media accounts for 13 percent. Only TV, with a daily reach of 80 percent, is consumed on a daily basis by a broader audience. Online radio is, somewhat surprisingly, used by just 15 percent of American radio listeners, even though close to 80 percent of the U.S. population has access to the internet.
Here at Manning Media Inc. we all said, “Well we knew that!”  Terrestrial radio is the original “social media” because it links people through music appreciation, news, information, and most of all, enjoyment!  Even in emergencies, people tune in to their radios for breaking information to help deal with the situation. Day-to-day needs such as traffic reports are found on terrestrial radio stations — keeping commuters moving. So headline is no surprise to us.
Radio, especially local radio, continues to be the “go-to” media for consumers and Manning Media Inc. has the ability to reach adults with spending power, ages 25 to 64, in Central Maryland, along the I-81 Corridor and into the Eastern Panhandle. 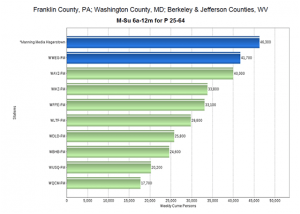 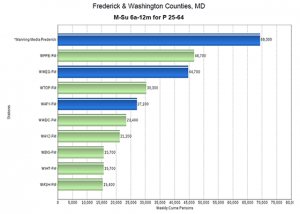