If you’ve heard of Adpocolypse, the tale of internet users who employ ad blocking tools so they are not shown digital display ads, and are feeling like this means the end of the world for digital marketing, you have my permission to take a deep breath and relax.
A recent study done by Tune is showing that Adpocolypse may be getting blown out of proportion. Yes, there are ad blockers out there, but for mobile advertising, they are over budget for many people. How much is over budget? A whopping one dollar per year.
According to the study, almost 70% of mobile users are not willing to pay anything to block ads. When you weigh that next to the 11.3% who are willing to pay one whole dollar a year, Adpocolypse doesn’t seem like nearly as big of a threat.

In the new ad blocking project called Flattr Plus, users who pay to block ads are paying participating sites not to run ads. So instead of earning money from advertisers, these sites get paid by the community. However, the study conducted by Tune showed that those who are willing to pay for ad blocking will only generate about 9% of what publishers are currently earning from mobile advertisers.
Additionally, though targeted digital advertising may be frowned upon by some audiences who refer to it as disturbing or intrusive, research by eMarketer indicates that many U.S. digital shoppers appear to find some targeting helpful. 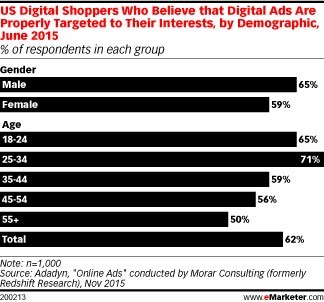 The study found that more than three out of five U.S. digital shoppers believe digital ads that are targeted to their interests are beneficial and 61% of digital shoppers thought ads for sites they had recently visited (retargeting) were helpful for completing purchases.
Geo-targeting was also found to be beneficial for respondents who were open to advertisements from local businesses. In fact, 71% of digital shoppers said they were more likely to respond to ads from local businesses than to ones run by national chains.
Accurately targeted ads mean relevant ads, and relevant ads drive better response. 40% of U.S. internet users said personal relevance is what motivated them to respond to an ad.
So before you believe the hype that digital users will go into full defensive mode and block your digital ads given the first chance, consider that your digital advertisements, properly targeted make for a shopping experience that is more convenient for many U.S. internet users.
Contact Manning Media in Frederick, 301-620-7700 or in Hagerstown, 301-733-4500 or by filling out our online request form and we can help you sort the advertising facts from the fiction.